Maryvale Preparatory, a private all-girls Catholic school in Baltimore, recently sent a letter to parents lying about the presence of Critical Race Theory in response to an article from Breitbart News that exposed their diversity director for making racially inflammatory remarks targeted at white students.

The article from Breitbart News cited videos that featured Kalea Selmon, the school’s diversity director, endorsing anti-white discrimination and advocating for segregation in order to protect non-white students from what she called the “white gaze.”

Selmon shockingly endorses discrimination against white children when she says “it is absolutely okay to give black and brown students things you’re not giving white children.”

In another video, Selmon discussed leveraging racially exclusive affinity groups to find young activists, or as she calls them, “boots on the ground.”

One clip features Selmon saying that her work is motivated by what she calls “70 0ver 460,” a reference to “the number of BIPOC students” at the school.

In an attempt to do damage control, the Chair of the Board of Trustees and the President of the school sent an email to parents addressing the article.

The email did not, however, address the racially inflammatory comments made by their diversity director. Rather, the letter lied to parents about the presence of Critical Race Theory at the school, claimed that the article was inaccurate, and even said that Maryvale was being “unjustly treated.” 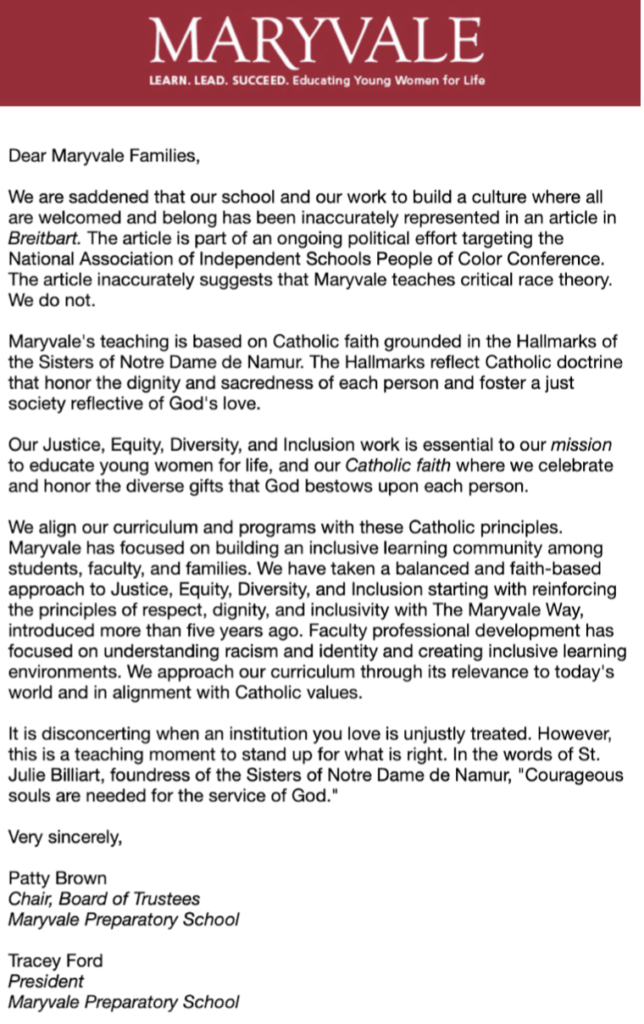 The letter claims, “The article inaccurately suggests that Maryvale teaches critical race theory. We do not.”

The article cites lessons for middle school students such as “The Historical Construction of Race and Current Racial Identities Throughout U.S. Society,” and “Racism as a Primary ‘Institution’ of the U.S. – How We May Combat Systemic Inequality.”

These lessons clearly seek to teach the core tenets of CRT — that America and its institutions are systemically racist and that race itself is a social construct that has been used to maintain a hierarchy that privileges white people.

Breitbart News has reviewed even more resources from the school that prove that Maryvale Preparatory is teaching Critical Race Theory to its students. One page of the school’s website notes that “Pollyanna Curriculum is being introduced into the Middle School curriculum.”

Pollyanna is an education firm that created “racial literacy curriculums” for both middle school and high school students.

One aspect of the curriculum, intended for eighth graders, is titled “Racism as a Primary ‘Institution’ of the U.S. — How We Combat Systemic Inequality.” In this curriculum, “students will unpack sophisticated ideas like white privilege and white supremacy.”

Another part of the curriculum, intended for sixth graders, is called “The Historical Construction of Race and Current Racial Identities Throughout U.S. Society.” It claims that “race is a social construct, designed to provide some people with advantage and to create a disadvantaged status.” The curriculum also cites infamous Critical Race Theorist Robin DiAngelo as a source.

According to Pollyanna’s website, their racial literacy curriculum is meant to encourage “a movement to empower people of color to reject racist socialization and to empower White people to be allies for racial justice work” as well as to “challenge structures and practices of racial inequality and racist ideas that assign inferiority to some and superiority to others.”

According to Maryvale’s website, administration at the school have also taken a course called “Factuality,” which describes itself as a “facilitated dialogue, crash course, and interactive experience, that simulates structural inequality, in America.”

Participants encounter “a series of fact based advantages & limitations based on the intersection of their race, class, gender, faith, sexual orientation, age, and ability,” the description reads.

As documented in the previous article, teachers at Maryvale Preparatory have undergone professional development training that teach the tenets of Critical Race Theory, which indicate that Selmon’s comments were not just offhand remarks, but rather part of a wider agenda.

Information on both these lessons — for middle school students and the professional development sessions — have been archived here.

Breitbart News reviewed one of the professional development sessions, which is made available for teachers on the Maryvale website. The webinar was titled ”Let’s Talk: Discussing Whiteness.” It was hosted by Teaching Tolerance, a project of the Southern Poverty Law Center.

One slide from the lesson claims that “whiteness refers to an unmarked and unnamed place of advantage, privilege, or domination,” also calling it an “organizing principle that shapes institutions, policies, and social relations.” 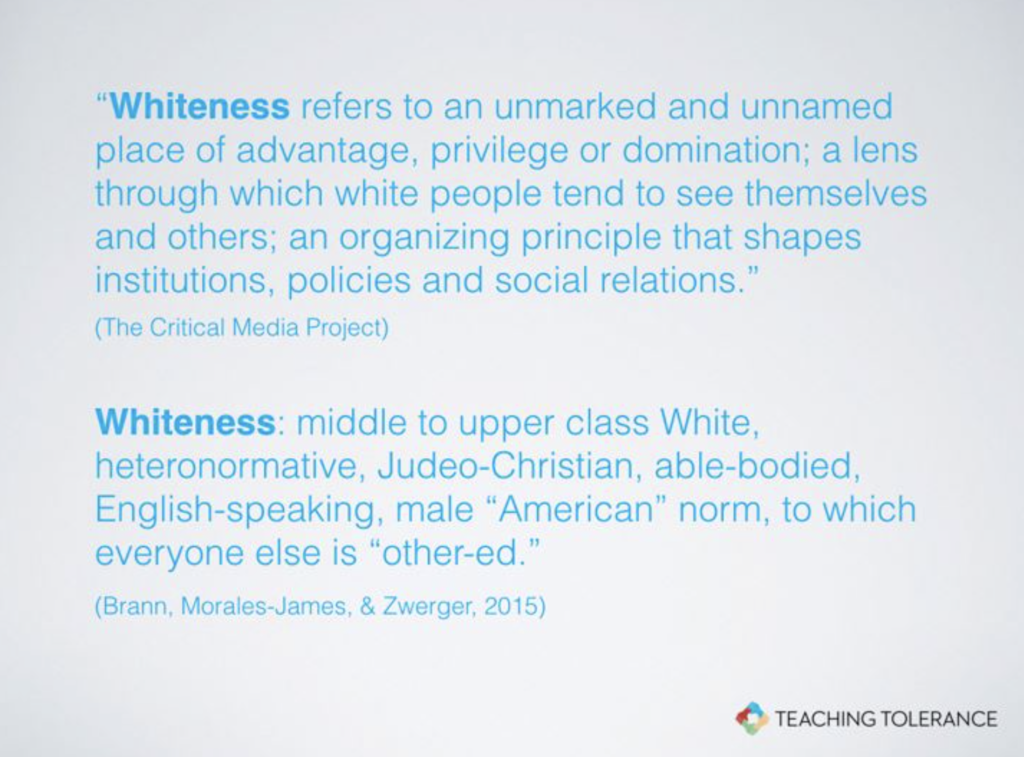 It also defines white privilege as “an invisible package of unearned assets that I can count on cashing in each day.” 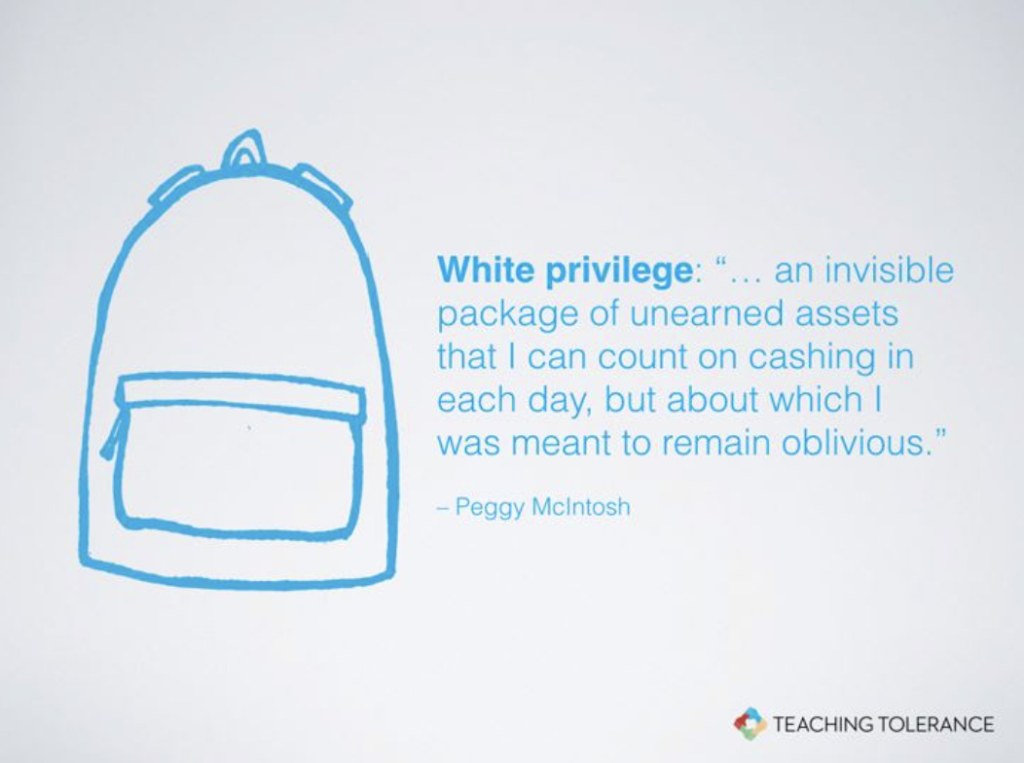 The webinar goes on to ask attendees, “What are some examples of the lessons, media, literature, or art that you may have introduced to students in a classroom that help them to critically examine whiteness?” 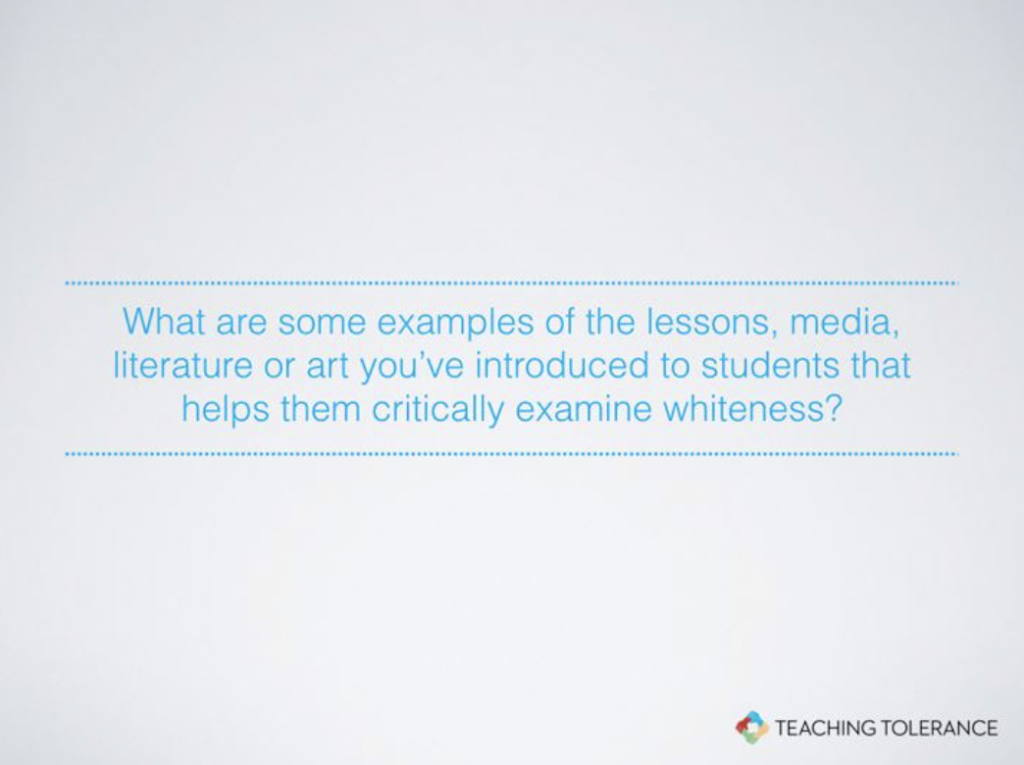 An article about the training seminar was titled “Why Talk About Whiteness?” and claimed that “we can’t talk about racism without it.” The article went on to assert, “It’s impossible to see the privilege and dominance associated with white racial identity” unless we discuss whiteness.

One presenter hoped to turn attendees into woke activists, remarking that “a positive white identity begins with acknowledging white privilege for sure, but it cannot end there. It must result in antiracist action.”

This is just one example of the Critical Race Theory-inspired trainings that were made available to teachers at Maryvale.

Four other workshops were completed by teachers in 2020, including one from infamous Critical Race Theorist author of White Fragility Robin DiAngelo titled “Healing the Racial Water: a half-day Anti-Racist workshop with Dr. Robin DiAngelo.”

A description of this session reads, “DiAngelo will explore topics including white socialization, systemic racism, breaking with white solidarity, the specific ways racism manifests for white progressives … and white fragility.”

It is undeniable that Critical Race Theory is present at Maryvale Preparatory and that it informs the curriculum and the diversity, equity, and inclusion agenda at the school.

Maryvale’s letter did not just lie to parents about the presence of Critical Race Theory, however. It also claimed that “Maryvale has focused on building an inclusive learning community.” The letter did not address how Selmon’s goal to create racially exclusive spaces to shield students from the “white gaze” of other students factored into the construction of a racially inclusive environment.

Breitbart News reached out to Maryvale Preparatory’s leadership for comment, asking what their message was to students and families who fear they may be discriminated against because of their race.

Maryvale did not respond to the questions posed by Breitbart News, but instead provided a copy of a new email they sent to parents. This email had a markedly different tone than the first, which attempted to discredit the article that brought to light the comments made by Selmon.

The new email began by saying, “The past week has been incredibly difficult for all of us.” It went on to articulate the steps that Tracey Ford, the president of the school, will take to address the concerns of parents and students “given the legitimate concerns raised by our community.”

Ford stated that she would be hosting “listening sessions” with students and parents and that she would be “assuming direct oversight of the Maryvale Justice, Equity, Diversity, and Inclusion efforts and securing expert advisors.”

Ford also states that she will “establish a diverse advisory group” that will “assist in leading us as we move forward.”

It went on, however, to say “We must not let this current situation undo the good work that has been done by so many in moving our mission forward. And we must not let forces divide our community.”

Ford also told the community that they should expect more media coverage, and told parents “posting on social media tends to add heat, not light, to most situations.”

The letter did not mention Kalea Selmon by name, nor did it address the contents of her comments, which expressed support for segregation and maligned white students. The letter also did not address the presence of Critical Race Theory at the school.

Maryvale Preparatory School is associated with the National Association of Independent Schools  (NAIS). This accrediting organization has a history of pushing both Critical Race Theory and “queer inclusive,” transgender ideology on young students, as Breitbart News has investigated and documented. In fact, Selmon’s comments took place at an NAIS conference.

Maryvale Preparatory School received over $1.2 million dollars in federal money through the Paycheck Protection Program. The all-girls school is a 501c3.

A covert network of concerned parents called Undercover Mothers has formed to fight back against the indoctrination of students at the hands of NAIS. The organization describes indoctrination in the private school system as a form of “elite capture.”

Following exposés by the Undercover Mothers, Rep. Jim Banks (R-IN) pledged to investigate NAIS if the Republicans retake the majority in Congress. Banks specifically scrutinized the organization’s role in political advocacy given its 501(c)(3) status as a non-profit.